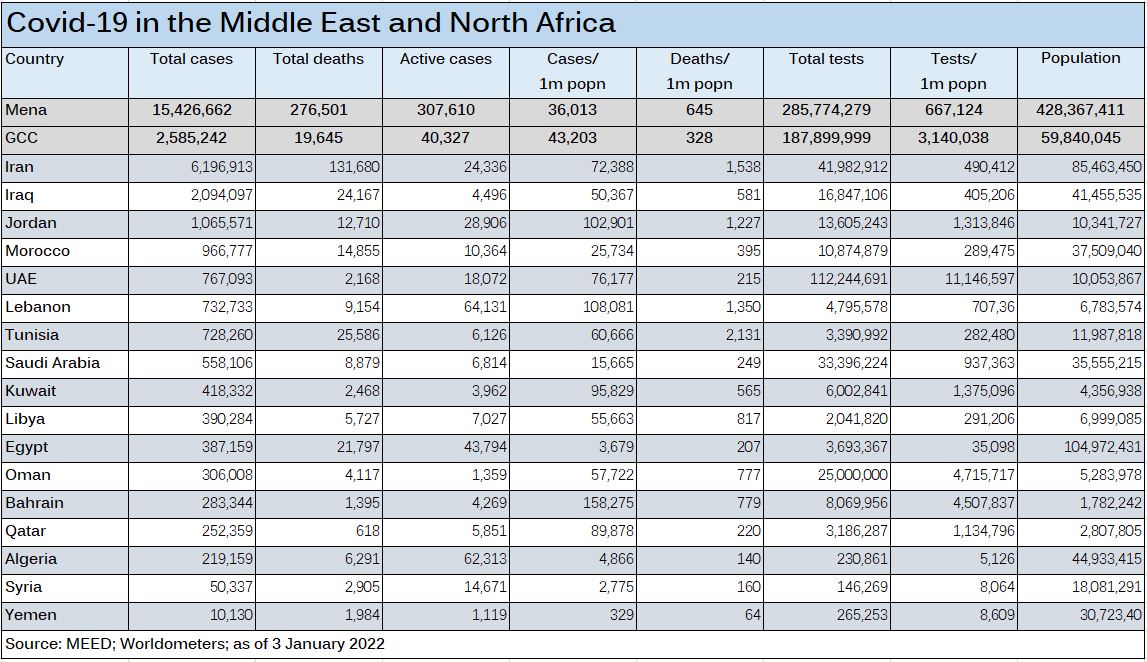 Since 12 December, 269,003 new cases have been reported in the 17 Mena countries tracked by MEED.
Lebanon recorded the highest case growth rate during the three weeks, with its cases growing 6.4 per cent from 688,515 on 12 December to 732,733 on 3 January.
In Jordan, the number of cases grew 6 per cent from 1,006,136 on 12 December to 1,065,571 on 3 January.
Saudi Arabia
The wearing of masks and maintaining social distance at all times has been mandated in Saudi Arabia as the kingdom reimposes health measures to contain the spread of the omicron variant. Social distancing was reimposed at the Mecca Grand Mosque and the Prophet’s Mosque, the state-controlled Saudi Press Agency (SPA) reported on 30 December. Last month, citizens and residents were also advised to avoid unnecessary travel outside the kingdom.
The Health Ministry said on 2 January that receiving a booster shot guards people against omicron complications. Health Ministry spokesman Mohammed al-Abd al-Aly said the pandemic wave was accelerating rapidly in Saudi Arabia, with numbers doubling every four to five days. According to local media, he added: “We expect there will be more and more cases in the coming stage of the pandemic.”
UAE
In an official statement on 27 December, Expo 2020 Dubai’s organisers said “venues may [close] temporarily for deep cleaning and sanitisation in response to positive cases detected by extensive workforce testing protocols, as well as for maintenance, private events and staff shortages”. No details on the number of cases detected at the expo site were mentioned. A restaurant named Sushiro, part of the Japanese pavilion, reported positive cases on 21 December among staff members and was shut down.
Late in December, the UAE also announced that the Sinopharm CNBG’s new recombinant protein vaccine could be given as a booster shot for people aged 18 years and above, six months after taking two or three doses of Sinopharm.
Bahrain
Manama announced in December it would offer a fourth Covid-19 vaccine dose to people who have received three doses of Sinopharm to curb the spread of omicron. The fourth dose will be available to those 18 and above, three months after receiving the first booster dose of Sinopharm. Pfizer-BioNTech or Sinopharm jabs are available as the second booster dose.
Kuwait
Kuwait will require anyone who has been fully vaccinated against Covid-19 for nine months to get a booster shot, according to a tweet issued by the government communication centre in December. Incoming travellers will also be required to quarantine at home for 10 days unless they provide a negative PCR test within 72 hours of their arrival.
Oman
Oman has announced new entry restrictions, making two-dose vaccination mandatory for expats aged 18 and above to enter the sultanate from all ports. Entry to Oman will be allowed to those who present a negative PCR test conducted “within a period not exceeding 72 hours prior to arrival”, the supreme committee to curb Covid-19 in the country said last month. 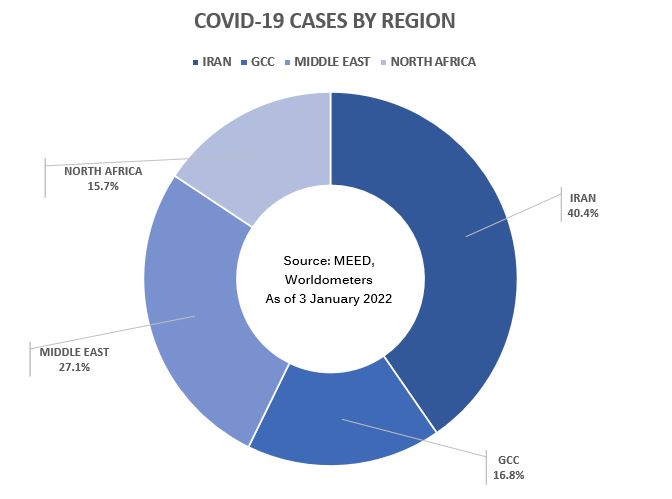 Iran
Late in December, Iran announced a two-week travel ban to contain a surge in infections driven by omicron, with air travel closed for 15 days from 25 December. Iranian citizens living in neighbouring countries may enter the country by land routes if they have received at least two doses of a Covid-19 vaccine and possess a negative PCR test card, as well as take a PCR test at the border.
Separately, the Noora coronavirus vaccine, developed and produced by Baqiyatallah University of Medical Sciences and affiliated with the Islamic Revolution Guards Corps, has entered the third phase of human trials, according to local media reports on 2 January. Five million doses of the vaccine have been produced and will be provided following local health approvals. Negotiations are also underway to sell the Iranian-made Razi Cov Pars vaccine, the local newspaper Tehran Times reported.
Egypt
Egypt received more than 2.3 million doses of the Pfizer-BioNTech, Moderna and Oxford-AstraZeneca vaccines late in December through the Covax alliance. The health ministry said the shipment contained 1,501,110 Pfizer doses, 462,000 Moderna doses and 352,800 AstraZeneca doses. On 2 January, Egypt received an additional 1.5 million doses of the Pfizer vaccine in Cairo.
About one-third of Egypt’s population, or more than 100 million people, had received a first shot of a Covid-19 vaccine as of 23 December. Higher Education Minister Khaled Abdel Ghafar said 33.77 million had been vaccinated at least once since the country’s inoculation campaign began nearly a year ago, with more than 20.94 million Egyptians fully vaccinated.
Jordan
Unvaccinated and partially vaccinated university students will not have access to online lectures, spokesperson for Jordan’s Higher Education and Scientific Research Ministry, Muhannad al-Khatib, reportedly said, adding: “Students who are not fully vaccinated with two doses of the Covid-19 vaccine are not allowed on campus, and if students are absent for over 15 per cent of the attendance period, they might fail their course.”
No student, lecturer or university employee who has not received both vaccine shots will be allowed on campus, Jordan Times reported.
Lebanon
Lebanon has imposed a three-week curfew between 5pm and 6am, ending 9 January to curb the spread of Covid-19. The committee responsible for tackling Covid-19 in the country said exemptions would be made for individuals “with at least one vaccine dose or a negative PCR test in the past 48 hours and children under 12”.
Morocco
Morocco has extended its nationwide health emergency to 31 January as it toughens restrictions, including a full flight ban. New year celebrations were also banned and vaccine pass requirements were more strictly imposed. As of 2 January, more than 3 million residents in Morocco had received a third dose of Covid-19 vaccines, with the number of individuals that have received two doses reaching 22.9 million.
Tunisia
In December, the health ministry approved the Russian one-shot Sputnik Light Covid-19 vaccine as a booster shot, according to Russia’s RDIF sovereign fund. Covid-19 vaccination passes became obligatory for Tunisians at the end of December in order to enter public spaces and gain access to state institutions, universities and private businesses. The pass will be needed for an initial period of six months, Arab News reported.
Algeria
A vaccine passport was mandated in Algeria from the end of December to boost the country’s low inoculation rate and overcome vaccine hesitancy. The pass will be required to gain entry to public spaces such as sports facilities, cinemas, theatres, museums, town halls and bathhouses. Less than a quarter of the Algerian population has been vaccinated so far.
Syria
Russia and Syria last month set up a working group to localise the production of the Russian coronavirus vaccine in Syria. Mikhail Mezentsev, chief of Russia’s National Defence Management Centre, said a “large-scale project” would be established to localise the production line. 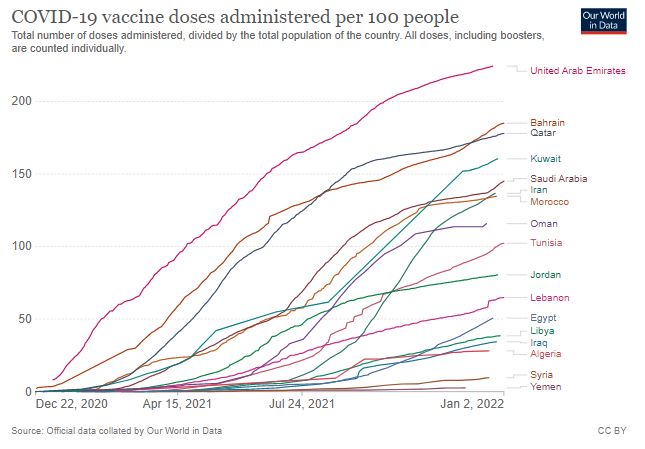